Welcome to the Actors Workshop Spain!

Welcome to the Actors Workshop Spain!

Look out for upcoming intensives Chubbuck technique during 2020 in Barcelona, Spain and Portugal.

The Actors Workshop Spain was created in 2004 to provide actors with the opportunity to study on a weekly basis in an international multi-cultural and creative environment. All classes are given in English/Spanish, although basic knowledge of English is required.

If your are serious about becoming an actor and you are willing to dedicate time and effort with a strong determination to achieve it, then the Actors Workshop is your school. We invite you to read some of the testimonials of our alumni. 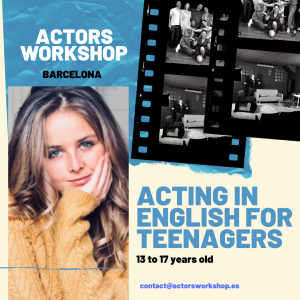 For more info send us an email.

The 5- days workshop starts on Monday and ends on Friday.

The 3-day workshop starts on Friday (3 hours), Saturday and ends on Sunday (6 hours each day).

For registration click on Inscription in the menu. Inscriptions deadline: 3 weeks before the starting date.

All intensive workshops are given in English and Spanish if necessary.

Spots are limited to 14 participants.

I am pleased to welcome you and to be part of making your dream come true. Hope to see you soon.

I sand it with Meisner and paint it with Chubbuck!

“I am proud that Frank Feys is an accredited teacher of the Chubbuck Technique.
He has an amazing facility to understand human nature, as he empowers his students to find their way in the arts.”